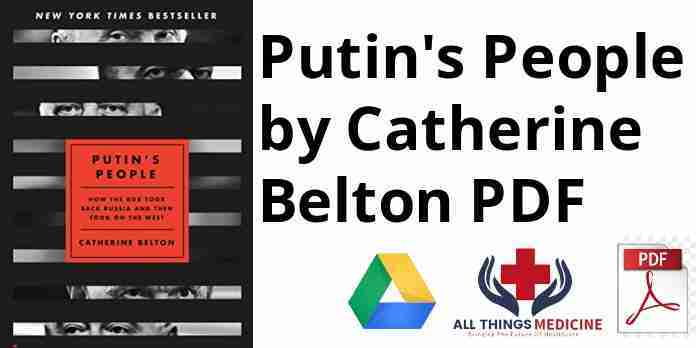 “[Putin’s People] will surely now become the definitive account of the rise of Putin and Putinism.” ―Anne Applebaum, The Atlantic

“This riveting, immaculately researched book is arguably the best single volume written about Putin, the people around him and perhaps even about contemporary Russia itself in the past three decades.” ―Peter Frankopan, Financial Times

Interference in American elections. The sponsorship of extremist politics in Europe. War in Ukraine. In recent years, Vladimir Putin’s Russia has waged a concerted campaign to expand its influence and undermine Western institutions. But how and why did all this come about, and who has orchestrated it?

In Putin’s People, the investigative journalist and former Moscow correspondent Catherine Belton reveals the untold story of how Vladimir Putin and the small group of KGB men surrounding him rose to power and looted their country. Delving deep into the workings of Putin’s Kremlin, Belton accesses key inside players to reveal how Putin replaced the freewheeling tycoons of the Yeltsin era with a new generation of loyal oligarchs, who in turn subverted Russia’s economy and legal system and extended the Kremlin’s reach into the United States and Europe. The result is a chilling and revelatory exposé of the KGB’s revanche―a story that begins in the murk of the Soviet collapse, when networks of operatives were able to siphon billions of dollars out of state enterprises and move their spoils into the West. Putin and his allies subsequently completed the agenda, reasserting Russian power while taking control of the economy for themselves, suppressing independent voices, and launching covert influence operations abroad.

Ranging from Moscow and London to Switzerland and Brooklyn’s Brighton Beach―and assembling a colorful cast of characters to match―Putin’s People is the definitive account of how hopes for the new Russia went astray, with stark consequences for its inhabitants and, increasingly, the world

The life of extraordinary people must be shared and Putin’s People by Catherine Belton PDF is one of its kind. It has all the information regarding the gentleman/woman’s struggles and their story of success or fiasco that every individual can learn from for their lives. It has grossed all charts and is the most recommended and praised books among those that read biographies and lives of people. A must read for a peaceful and wiser livelihood. Available without cost here.

Catherine Belton reports on Russia for The Washington Post. She worked from 2007 to 2013 as the Moscow correspondent for the Financial Times, and in 2016 as the newspaper’s legal correspondent. She has previously reported on Russia for The Moscow Times and BusinessWeek and served as an investigative correspondent for Reuters. In 2009, she was short-listed for the British Press Awards’ Business and Finance Journalist of the Year prize. She lives in London.

“[Putin’s People] will surely now become the definitive account of the rise of Putin and Putinism . . . [Belton] adds enough new details to establish beyond doubt that the future Russian president was working alongside the people who set up the secret bank accounts and held the meetings with subversives and terrorists. More important, she establishes how, years later, these kinds of projects came to benefit him and shape his worldview.'” ―Anne Applebaum, The Atlantic

“A landmark work of investigative journalism . . . The stark implication of Putin’s People is . . . that England itself has been a silent and handsomely compensated partner in Putin’s kleptocratic designs . . . Belton name[s] names.” ―Patrick Radden Keefe, The New Yorker

“The cast of supporting characters in Catherine Belton’s study of the Russia of Vladimir Putin is extraordinary and worthy of a Netflix mini-series . . . This is modern Russia in full, horrifying technicolour. In Putin’s People, Belton, a former FT Moscow correspondent, leaves no stone unturned in her exposition of how the Russian president and his “people” dominate the largest country on Earth and how they have come to do so.” ―Peter Frankopan, Financial Times

“The dauntless Belton . . . [talked] to figures with disparate interests on all sides, tracking down documents, following the money. The result is a meticulously assembled portrait of Putin’s circle, and of the emergence of what she calls ‘K.G.B. capitalism’―a form of ruthless wealth accumulation designed to serve the interests of a Russian state that she calls ‘relentless in its reach.'” ―Jennifer Szalai, The New York Times Book Review

“In her deeply researched new book, Catherine Belton tells a dark tale of Vladimir Putin’s rise to power and his 20 years as leader of Russia . . . Belton, a former Moscow correspondent for the Financial Times, digs deeper. Hers is a story about Putin, his KGB colleagues, businessmen and mobsters pieced together through interviews with many relevant players.” ―Anders Åslund, The Washington Post

“A staggering achievement of reporting . . . The level of depth [Belton] reaches, and the analysis of the details which are, by design, entirely opaque transactions and financial arrangements, is simply incredible. Belton follows the money.” ―Joshua Huminski, Diplomatic Courier

“Through meticulous research into financial networks, Belton investigates Vladimir Putin’s political ascent via the KGB ties at the center of her story. She captures the texture of Putin’s government: its approach to power, its ambition, its cynicism, its desire to reverse the defeats of 1989 and 1991 and then to translate KGB formulas into a new international affairs paradigm.” ―Michael Kimmage and Matthew Rojansky, The New Republic

“A fearless, fascinating account of the emergence of the Putin regime . . . [Belton] has an unrivalled command of the labyrinthine history of share schemes, refinancing packages, mergers, shell companies, and offshore accounts that lay bare the stealthy capture of the post-Soviet economy and state institutions by a coterie of former KGB officers . . . The result reads at times like a John le Carré novel.” ―Daniel Beer, The Guardian

“The plot sounds like a geopolitical thriller. Amid an empire’s collapse, the secret police funnel money out of the country, creating a slush fund to rebuild their old networks. They regain power, become spectacularly rich and turn on their enemies, first at home―and then abroad.” ―Edward Lucas, The Times (London)

“Relentless and convincing . . . This is the most remarkable account so far of Putin’s rise . . . Belton offers the most detailed and compelling version [of this story] yet, based on dozens of interviews with oligarchs and Kremlin insiders, as well as former KGB operatives and Swiss and Russian bankers . . . Gobsmacking . . . A superb book.” ―Luke Harding, The Guardian

“Relentless and magnificently detailed . . . Putin’s People is a serious, absolutely timely warning. No book has documented the Russian president’s leadership so indefatigably and compellingly. If you want to grasp in full how Russia has become the nation it has in the last 20 years, this is the book you’ve been waiting for.” ―Julian Evans, The Telegraph

“The single best book to explain the present-day Kremlin . . . Putin’s People is must reading for anyone trying to understand Putin and the challenge of dealing with modern Russia.” ―John Sipher, The Cipher Brief

“How [Putin’s fellow] “operatives” got into power and what they did with it is the subject of this long-awaited, must-read book by Catherine Belton, a former Moscow reporter for the Financial Times who spent years investigating the most sensitive subject in Russia ― the business dealings of Putin and his circle of cronies (or siloviki). By following the money and diving deep into the squalor, she has pieced together a disturbing picture of a criminalised regime whose methods are more like the mafia than a state.” ―Arkady Ostrovsky, The Sunday Times

“As Catherine Belton’s powerful and meticulously reported new book shows, the apparent anarchy of the post-Soviet world has instead given way to a massive concentration of wealth and power, which is used by the new Russian elite to quash dissent at home and project force abroad . . . A narrative tour de force.” ―The Economist

“[Catherine Belton’s] book is fast-paced, thoroughly researched and packed with new―or at least not widely known―facts . . . This is the best kind of journalist’s book, written with an eye for a well-turned story and compelling characters, and steering mercifully clear of academic theorising. And what tales Belton has to tell.” ―Owen Matthews, Spectator

“A book that western experts on modern Russia acknowledge as vital to our understanding of the Putin phenomenon . . . Belton draws on published sources and deep-throat contacts to plot a course through the maze of crooked financial manoeuvres―the sleights of hand, the back-room deals, the ‘loans’ from state banks, the kick-backs on contracts―that Putin and his courtiers got up to as they systematically drew the wealth to themselves as inexorably as iron filings to a magnet.” ―Tony Rennell, The Daily Mail

“Insightful . . . it is the details unearthed by [Belton’s] interviews with an extensive collection of insiders that make her arguments so convincing and the book such a gripping read.” ―Lynn Berry, Russia Matters

“Drawing on extensive interviews with Kremlin insiders and dispossessed oligarchs such as Sergei Pugachev and Mikhail Khodorkovsky, Belton paints a richly detailed portrait of the Putin regime’s tangled conspiracies and thefts . . . A lucid, page-turning account of the sinister mix of authoritarian state power and gangster lawlessness that rules Russia.” ―Publishers Weekly

“Catherine Belton is quite simply the most detailed and best-informed journalist covering Russia. One hears so much grand punditry about the country, but if you want to know the terrifying facts, from the nexus of KGB, business, and crime which was Putin’s petri dish to the complex reality of the relationship with Trump―and if you want to see how all this combines into a whole new system―then this is the book for you.” ―Peter Pomerantsev, author of This Is Not Propaganda and Nothing Is True and Everything Is Possible

“Putin’s People is meticulously researched and superbly written, terrifying in its scope and utterly convincing in its argument. It is a portrait of a group of men ruthless in their power and careless of anyone else. This is the Putin book that we’ve been waiting for.” ―Oliver Bullough, author of Moneyland and The Last Man in Russia

“Putin’s People is a ground-breaking investigative history of the rise of Vladimir Putin and a revealing examination of how power and money intersect in today’s Russia. Catherine Belton has pulled away the curtain on two decades of hidden financial networks and lucrative secret deals, exposing the inner workings of Putin & Co. in remarkable and disturbing detail. A real eye-opener.” ―David E. Hoffman, author of The Oligarchs: Wealth and Power in the New Russia

“Catherine Belton deftly tackles one of Russia’s biggest mysteries―how did an undistinguished, mid-level former intelligence operative like Vladimir Putin catapult himself to such lofty heights? Her deeply researched account digs into unexplored aspects of Putin’s rise to power as well as the experiences of longtime Putin friends and allies who have harvested most of the benefits from his 20 year reign.” ―Andrew S. Weiss, James Family Chair and vice president for studies at the Carnegie Endowmen

We Are the Luckiest by Laura McKowen PDF Download Free