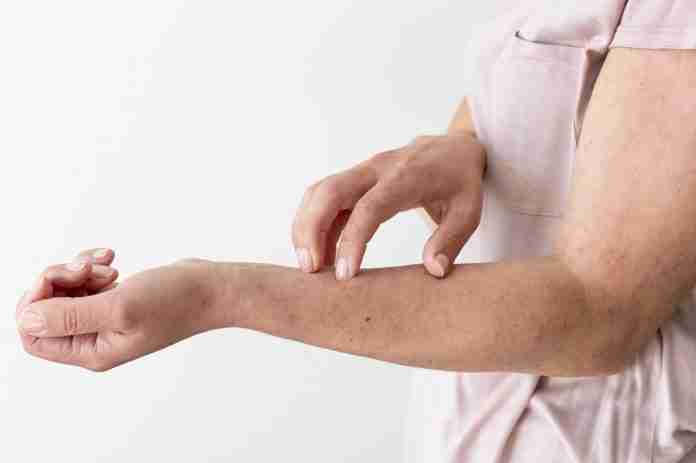 Eczema and psoriasis are both very common skin conditions. They often look very familiar and may have a similar set of symptoms but they are in fact, very different from each other.

Eczema and psoriasis are both non-contagious and chronic skin conditions. They both cause red, inflamed, raised and itchy rashes on skin. However, psoriasis is an auto-immune skin condition while the exact cause of eczema is unknown. It is believed to be a response to certain allergens that trigger the immune system to elicit inflammation.

The similarity in appearance makes it difficult to distinguish between the two especially if you or your loved one are encountering this rash for the first time. Keep reading while we shed some light on their differences, symptoms and treatment.

Eczema is a chronic inflammatory skin condition which causes red, inflamed and itchy rashes on skin. It usually presents in childhood and sometimes is a life-long condition.

It is believed to be triggered by environmental factors or irritants such as pollen, dust, extremely hot or cold weather, soaps etc. It is often associated with other conditions such as asthma and allergic rhinitis. Certain foods can also trigger eczema

Eczema is not contagious. It does not spread from one person to another. It is also known as ‘atopic dermatitis’ and has 7 different types, with atopic dermatitis being the most common.

It is not contagious and a life-long condition which keeps coming back in cycles. There are periods of flare up followed by periods of healing and remission. This cycle continues throughout life.

What are the symptoms of eczema and psoriasis?

The symptoms and appearance of eczema and psoriasis may seem very similar which makes it difficult to tell them apart. However a dermatologist will be able to differentiate them instantly.

The symptoms of eczema include:

The symptoms of psoriasis include:

Where do eczema and psoriasis usually appear?

Eczema and psoriasis can occur on any part of the body. Eczema usually appears on places that flex, such as the inner side of elbows, back of the knees, wrist, in front of the neck and ankles.

Psoriasis typically appears in the palm of the hands, soles of the feet, trunk, face, nails, elbows, knees and scalp.

Seborrheic dermatitis, commonly referred to as ‘dandruff’, appears as itchy, scaly patches of skin that are white to yellowish in color. The patches also appear greasy. The most commonly affected area by this condition is the scalp although other areas of the body may also get affected.

Scalp psoriasis on the other hand, scalp psoriasis appears as red, raised patches of skin with silvery scales which are itchy and tender to touch. Scalp psoriasis can sometimes extend beyond the hairline and appear on the forehead or the back of the as well.

Diagnosis: When to see a doctor

It is important to see a dermatologist if you have a rash on the skin that would not go away. Since the rashes can be itchy, scratching them could lead to bleeding or make cracks in the skin due to which the rash can become infected.

A dermatologist will also be able to tell eczema and psoriasis apart, and prescribe the treatment accordingly.

Treatment of eczema and psoriasis

Eczema has no cure. It can be managed with lifestyle changes, over-the-counter and prescription medications. The key to avoiding flare ups is to know your triggers and avoid them. The treatment of eczema includes:

Other than these medications, a few lifestyle changes can help prevent flare ups. Some of these are:

Like eczema, psoriasis does not have a cure. The aim of the treatment plan is to relieve the discomfort, remove the scaly patches and slow down the growth of new skin cells. The treatment can include:

The combination of systemic, topical and injectable drugs is prescribed by the doctor according to the severity of the rash and it also depends upon how stubborn the rash is.

The prevention of psoriasis is more or less the same as for eczema.

Eczema and psoriasis are both chronic skin conditions which are not contagious and have no cure. Eczema is believed to be triggered due to allergens or environmental factors while psoriasis is caused due to an overactive immune system producing new skin cells at a rate 10x more than the normal production rate.